French electric to be available this Summer

The French motorcycle and auto manufacturer Peugeot’s electric scooter e-vivacity is expected to hit stores in Europe this summer. Filling up the battery costs only $0.35. With a 100% electric charge, this scoot can make 37 miles at a speed of 28mph.

The Scoot’Elec was powered by a DC motor fed by three Saft nickel-cadmium batteries. The new e-vivacity is equipped with two Saft lithium-ion batteries, which take up less than half the space and weigh less than half as much as their predecessors. The new batteries enable accelerations from standstill equal to those of many 125cc models despite being a 50cc equivalent model.

To recharge the batteries, the cable lodged under the seat needs to be connected to a domestic plug or an urban charge port. A complete recharge requires between five and eight hours depending on whether the vehicle is equipped with one or two chargers; if with two, then 80% of the full charge can be obtained in just three hours. Partial charges do not affect the batteries’ useful life. 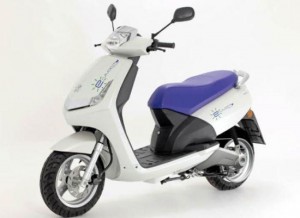 The new e-vivacity comes with 35L storage space, which means it can accommodate one full face helmet under the seat and one half face helmet in the front storage compartment.

We have not heard of any news about plans for Peugeot hitting the US stores.

s take up less than half the space, and weigh less than half as much as their predecessors.
← Next post Previous post →
da_cats tagged this post with: 2011, e-vivacity, electric, France, lithium-ion, news, peugeot, Saft Read 41 articles by da_cats