Will the MINI Scooter Concept make it to production?

Filed under concept, news {no comments}

Last September, MINI unveiled its Scooter E Concept during London Fashion Week, followed by a showcase a month later during the Paris Motor Show. At that time, it was announced that it would make it to production only if reactions during the Paris show were positive. But so far, there haven’t been any further news about the production plans for this stylish babe. 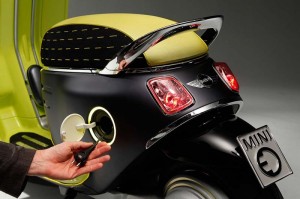 The zero emission MINI scooter is powered by an electric motor integrated into the rear wheel. Its lithium-ion battery can be recharged by any conventional power socket. On top of it all, this cool urban design by MINI uses your smartphone as the ignition key and it comes with a phone dock in the dashboard in which you can integrate your smartphone, so that you are up to date with scooter traffic, navigation info and are connected into social networking even during a ride.