FRIDAY, MAY 6TH: GET READY FOR INTERNATIONAL FEMALE RIDE DAY!

Filed under press release {no comments} 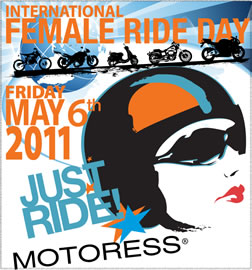 May 2, 2011, Motoress, Press Release – This week, on Friday, May 6th, women riders around the world will get on their motorcycles or scooters to celebrate the fifth International Female Ride Day. This unique and globally synchronized event has no other counterpart in the world, and will bring together thousands of women motorcyclists from all over the planet. In 2011, the International Female Ride Day is about to precede prior years attendance as more countries and women riders join the action.

International Female Ride Day (IFRD) whose simple theme asks women to “JUST RIDE”, is a designated day, aimed at bringing awareness to the existing and mounting numbers of women motorcyclists. It is the only event of its kind on the planet and which has been bringing women riders together since 2007. “International female Ride Day is a unique event in the world. No other event is or has ever reached out to women from all parts of the world on just one global, synchronized day- this is the real deal! It’s success is equally attributed to women riders of all ages, styles of riding and motorcycle brands who took this idea I presented to them five years ago and made it what it is- phenomenal!” says Vicki Gray, founder of the International Female Ride Day and of MOTORESS. “For the 5th year we’re so excited to include women rider groups in Russia, Germany and India to the action. Since the beginning, IFRD has attracted more and more women. It is incredible to see its growth! Women know that they are participating in a unique event that has no relation whatsoever to the type of bike they are riding”, states Vicki.

Since its introduction in 2007, International Female Ride Day has continued to expand demonstrating magnificent growth. This has also been a result of the endorsement and support

MOTORESS® International headquartered in Toronto Canada “Connects Women with Motorcycling” through its global online community and magazine. MOTORESS® engages its

readers within the passion they seek in every aspect of their motorcycling lifestyle, while providing education and knowledge along with news, gearstyle, technique, beauty, health, inspiration and more. MOTORESS® is forging the most feminine, friendly vibrant motorcycle community for women anywhere. For more information about MOTORESS.com visit: http://www.motoress.com